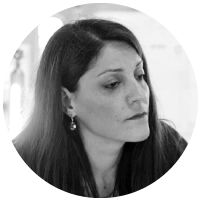 Katerina Kritou (Katerini, Greece, 1979) studied architecture in United Kingdom, BA (Hons) University of Portsmouth (2001) and in Greece, Diploma University of Thessaly (2005). In 2011 she completed her postgraduate studies (MA) in Architec- tural Design at UTH, which deals the critical issues in architecture & space. Since 2006 she maintains an architectural practice in Volos with main subject private & public projects and participates in architectural and art exhibitions. She honoured with distinction (2012) from the international architectural magazine DOMES for the collective project “Summer House in Naxos”, which was also nominated for European Union Prize for Contemporary Architecture_ Mies van der Rohe Award (2015). She has been collaborating in the postgraduate course “Post-Industrial De- sign” of UTH (2015- ), teaching in the design workshop, “Working Shells”, which explores the disintegration of workplaces and produces the new condition of the changing laboratory platform.