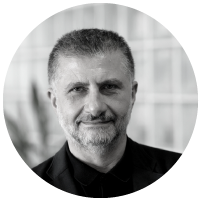 Yiannis Toumazis studied Civil Engineering at the National Technical University of Athens, Greece, Theatre Design at HKU University of the Arts Utrecht, in The Netherlands, and Theory of Art and Aesthetics at the University of Picardie Jules Verne in Amiens, France, where he received his Ph.D. He joined Frederick University in 2009 and he is Assistant Professor in the Department of Fine and Applied Arts of Frederick University in Nicosia, teaching Aesthetics, History of Art and History of Design. His research focuses on the current developments in modern and contemporary art both in Cyprus and in the international art scene. Since 1994, he has been the Director and Chief Curator of NiMAC, the Nicosia Municipal Arts Centre, Associated with the Pierides Foundation. He is also the Director of the Pierides Foundation, one of the oldest private cultural institutions in Cyprus. He has designed, organized and curated several international contemporary art exhibitions. In 2011, he was the curator of the Cyprus Pavilion of the 54th Venice Biennale in Venice, Italy. He has been actively involved in Museum Design, including the award-winning THALASSA Municipal Museum in Ayia Napa. In January 2014, he was appointed by the President of the Republic Chairman of the Board of the Cyprus Theatre Organization (THOC). He was reappointed for a second term in 2016. In May 2015, he was appointed by the President of the Republic Vice-President of the Bi-communal Technical Committee of Culture, which aims to bring together the two main communities of Cyprus through Culture. In 2011 he was named Knight of the Order of Arts and Letters by the French Republic for his contribution to culture. In 2020 he was elected Corresponding Member of the Cyprus Academy of Sciences, Letters and Arts.